Remembering to be Brave 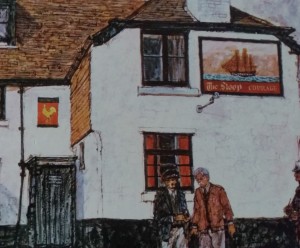 When the universe whispers, it’s always a good idea to listen. For weeks now, a slight whistling sound has passed by my ears.

Maybe because I’m a writer, the universe’s favourite way of getting my attention is to flash words in front of me. Like the time I was desperate to understand my protagonist and while on my daily walk, wondered what kind of music he might listen to. Moments later, I passed a parked car with a license plate that read CCR. Of course, my baby-boomer protagonist would listen to Creedance Clearwater Rival–CCR.

As with the above example, these flashes aren’t always meant to help me sort through monumental personal issues or to solve world problems, but they are signs letting me know whether I’m on the right, or the wrong path. Add my gut to the choir, and I’m usually able to identify which road is which.

So last Friday, when the same word appeared in two random places (top right hand corner of a placemat I’d bought at a second-hand store, and the sticker my granddaughter had placed on her cheek), I took notice.

Ah, the dropped penny. I’ve been thinking a lot about courage and bravery of late. If you read my post from last week, you’ll recall I mentioned my admiration for the courage I’ve seen the musical phenomena ADELE demonstrate throughout her career and to the courage I’ve seen my own daughter muster every day.

Time to figure out how the world was asking me to be brave and what these two young women could teach me about courage?

The how was easy. I knew where I needed to be brave. As a novelist, I live in a world of pretend, but inside that pretend world a lot of real things happen. I write to explain my world, and in order for my readers to believe anything I say, I have to dig deep. I have to be brave enough to pick up a shovel and pitch rocks and dirt over my shoulder.

So how can a singer and my daughter teach me to be brave in my writing?

Think I’ve figured that one out as well. Driving to meet my tribe of writers, an impassioned Adele song blasting from my car stereo, I had a sudden realization. I believe everything Adele sings about because she’s bravely willed herself to relive the pain and sadness in order to write authentic songs about pain and sadness. If I’m to be believed and have any hope of moving my readers, I have to do what all great artists do so fearlessly—I have to drop deep into the emotions I’m depicting. I have to feel them. I’m being asked to give a slice of myself in order to produce my art. But here’s the good news. Once I’ve released it, my usual state of sanity (whatever that may look like) will be returned, and I’ll have produced something of value. Bravery is always rewarded. Sure, I knew all that before, but listening to Adele and watching how she’s returned from her sad and dark places, I’m reminded what artistic courage looks like.

And my kid. That’s an easy one. As I watch her make her way, she teaches me that no matter the challenges life throws my way, I can get up. I can get dressed, and I can face the world with dignity. Lucky me. I have a living, breathing example of courage that I can infuse into my characters whenever they are called on to be brave.

Courage isn’t a one shot deal. It has to be revisited regularly. This week, Adele, my kid, a placemat and a sticker have reminded me it’s time for a courage check in.